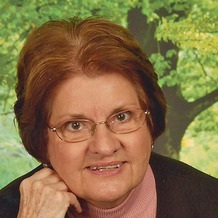 Joanne Jansen, Organist and Parish Musician at St.Matthew Lutheran Church, began studying the piano at an early age and began organ lessons at age 14, continuing both through college. During that time, she was free-lance organist in several churches in the Grand Rapids area. In 1964, she was accepted as an organ student of Dr. Claire Coci of New York, an international concert organist,from whom she gained excellent instruction in recital repertoire for the organ.

In a trip to Germany in 1963 with a group of fellow musicians, she visited Leipzig where she was able to play the organs in St. Thomaskirke where Johann Sebastian Bach was cantor, organist, and music director from 1723-1750, and where he composed many of his compositions on the Lutheran chorale. In 1965, she came to Grand Haven when called to be organist at First Presbyterian Church. She initiated a Saturday morning Choir School for children, directed the children's choirs, and 5 bell choirs. Later, she became the Director of Music, directing the Geneva Choir. During that time the Geneva Choir went to England twice and Switzerland once to sing with the International Church Music Festival Choir directed by the late Sir David Willcocks, and Paul Leddington Wright. The choir sang in Coventry Cathedral and Chester Cathedral in England, and in a large music hall in Switzerland.

During those trips, Ms. Jansen visited many cathedrals and important musical venues. Several of her compositions for adult and children's choirs and handbells have been published, though no longer available. In 2010, she earned the Colleague Certificate of the American Guild of Organists (CAGO) by taking a written examination and performing prescribed music. She is a member of the American Guild of Organists (AGO), and the Association of Lutheran Church Musicians. Her greatest interests have always been music, especially the music of the church, hymnology and theology